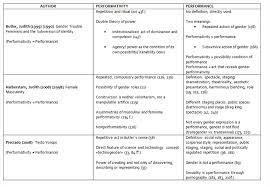 In one of the most renowned articulations of the difference between sex and gender, Simone de Beauvoir remarked, “One is not born, but rather becomes a woman.” De Beauvoir does not mean that we should assume that no one is born with reproductive organs, but rather that the social function of “woman” (or “man”) is derived from a set of behaviors that we are trained into. The distinction is critical for understanding much feminist and queer theory, as well as the diversity of human identity in general, yet it’s one that gets lost in popular usage of the terms sex and gender all too often (Gender Performativity).

Gender disparities are determined by society, not biology. Gender has become naturalized, knit so deeply into the social fabric that it appears to be unavoidable. One thing to keep in mind regarding Butler’s thesis is that, despite the use of a theatrical metaphor, “performativity” is not the same as “performance,” as both she and our philosopher above emphasize. Gender isn’t something you put on one night and take off the next, like a Shakespearean actor who plays male characters one night and female characters the next. Rather, “performative” refers to an act that not only communicates but also establishes an identity for Butler.

What is Gender Performativity?

Using the word “guilty” during a trial, for example, is an example of performative speech. The term “genderqueer” can also refer to someone who is gender fluid. Genderqueer is a term used to describe someone whose gender identification does not fit neatly into the gender binary. Agender, that is no gender, bigender which refers to both male and female, and demi gender (partial connection) are other LGBT+ terminology for fluid.

Regrettably, contemporary culture frequently simplifies performativity to the notion that “gender is a social construct.” This term pits the ‘social’ against the ‘natural,’ implying that gender is only an artificial veneer affixed to the ostensibly more fundamental fact of sex by choice. Butler, on the other hand, avoided arguing for a clear division between nature and culture, or between sex and gender.

Gender wasn’t determined by nature or biology for her, nor was it merely ‘made up’ by society. Butler emphasized that gender is determined by repeated words and deeds, which shape and are shaped by the bodies of real, flesh-and-blood human individuals. And, more importantly, such repeats are rarely done at will. Gender identity is often formed in early childhood, around the age of two or three. Gender identity is formed in a variety of social situations, including a person’s family, larger community, and society and historical period in which they live.